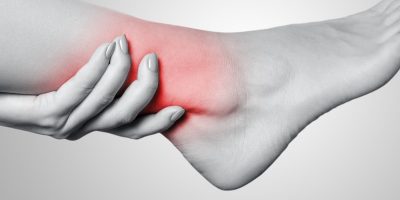 Acute ankle sprains are one of the most reported musculoskeletal injuries amongst the general population, with up to 70% of people reporting an ankle injury in their life time. Representing roughly 15% of all injuries reported, the highest rates of ankle sprains are typically reported in sports and activities that are characterised by running, cutting and jumping, such as basketball, football and volleyball.

Inversion injuries/lateral ankle sprains (ie. the ankle “rolling inwards”) make up for more than 85% of all ankle sprains. Among the general population, ankle sprains are typically influenced by age, with those aged between 10-19 being the most susceptible to injury, as well as a predisposition through previous ankle injuries. Those who have a history of even one ankle sprain have been found to be 2 times more likely to sustain further ankle injuries. Such a high re-injury rate may be due to poor rehabilitation and/or premature return to sport.

With this, there is a strong association between ankle sprains and the development of chronic ankle instability (CAI). CAI includes mechanical instability (ankle range of motion exceeds normal physiological limits) and functional instability (feeling like the ankle it going to “give way” either at rest or during activity).

After an acute ankle sprain, the individual is likely to experience pain, tenderness and swelling in the ankle, as well as only being able to partially weight-bear on the affected side. These symptoms may last from a few hours to a few weeks, depending on the severity of damage and the management of the injury.

Following an acute injury, it is important to seek professional medical advice to allow for proper management and recovery. A Physiotherapist or Exercise Physiologist will work closely with you to help reduce swelling, increase passive and active range of motion, improve strength and stability and re-develop motor control and coordination through the affected joint allowing for a safe return to sport. It is essential to begin rehabilitation early after injury, as starting exercises in the first week provides significantly greater outcomes to short term ankle function.

If you have recently suffered from an ankle injury, or have in the past and experience any of the above instability symptoms, call Motion Health on 03 9825 2697 to book an appointment with an Exercise Physiologist or Physiotherapist today.